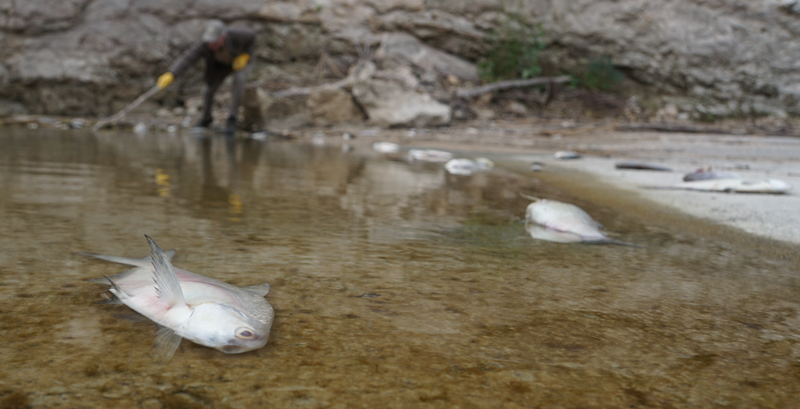 Hugh Fitzsimons checks out the collection of dead and dying fish at the Pecos River boat ramp. The fish are dying by the hundreds because of a bloom of golden alga, according to an investigation by the Texas Parks and Wildlife Department. Photo by: Colin McDonald
Email
Twitter
Facebook

For four days, dead and dying fish have washed ashore at the boat ramp at the mouth of the Pecos River.

The one advantage of the temperatures dropping near freezing every night was the stench of the rotting gar, largemouth bass, crappie, sunfish, shad and minnows was not too bad. The layer of slime that was growing on the cement ramp, however, was a bit treacherous.

I took it as a sign it was time to go home. After spending two month on the river there is gear, relationships and injuries to mend. I also have to work out the logistics for the last 600 miles to work out.

I want to say thank you to Erich Schlegel, Jason Jones, David Lozano and Dan DiBona for their help, advice and companionship in getting from El Paso to Big Bend. That was the most difficult reach of the Rio Grande to travel and it took a toll on all of us.

I’ll head back to the confluence of the Pecos and Rio Grande on December 2 with photographer Mike Kane. We have talked about this project for more than five years. It’s a dream to be able to work with him. Wait until you see what he can do with a portrait.

The other advantage of heading back to the world of heated rooms with reliable phone and internet service is that it is easier to figure out what is going on.

It turns out fish have died en masse in the salty Pecos River since at least 1985 due to golden alga, Prymnesium parvum, according to the Texas Parks and Wildlife Department.

Not much is known about the single-cell microscopic alga. It is found in salty and brackish water around the world. Texas biologists were the first to identify it in the Western Hemisphere in fresh water on the Pecos. It has since been found in the Brazos, Canadian, Colorado and Red River basins.

It is believed that golden alga produces a toxin to make catching bacteria and other alga, which the plant then eats, easier.

The problem for fish is that when the population of the golden alga grows exponentially, for reasons that are not understood, the toxin starts to kill the cells of their gills and internal organs one layer at a time.

“Fish behave as if there is not enough oxygen in the water,” said the TWPD website. “They travel at the top of the water surface or rest on the bottom in edges and shallow areas.”

That’s exactly what Hugh Fitzsimons, a supporter of this project, and I saw as we explored the flat water of the Pecos on Wednesday.

The fish were scattered over 3 miles of the wide river.  Some were floating belly up. Others were on their side with one fin slowly flapping above the water. Lucky for us, the toxin of the golden alga does not seem to have any impact on mammals or birds.

We saw close to a dozen ospreys dining on the fish along with a growing crowd of vultures.

It was good day for them, but I had enough of paddling amongst dead fish and hitched a ride home with Hugh.

Disclosure: Hugh Fitzsimons is a major donor to The Texas Tribune. A complete list of Tribune donors and sponsors can be viewed here. 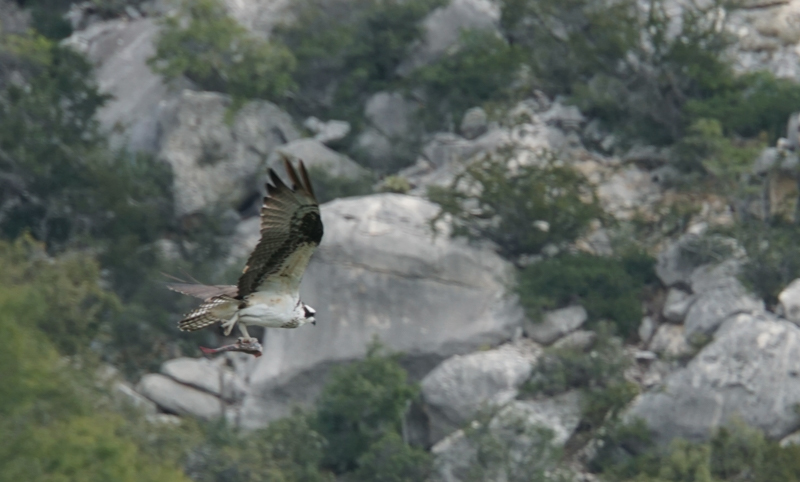 An osprey carries away a fish from the Pecos River. It was a day of easy fishing as hundreds of dead and dying fish were floating near the river surface. Photo by: Colin McDonald

An osprey looks for a perch so it can dine on a fish it just pulled from the Pecos River. Photo by: Colin McDonald 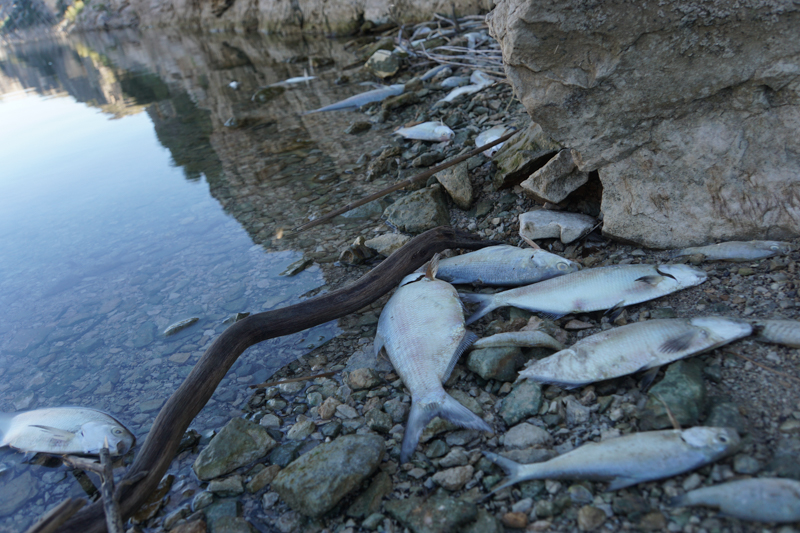 It seems few large mouth bass survived the golden alga bloom of the lower Pecos. On a rare day with almost no wind, the fish were washing up by the hundreds. Photo by: Colin McDonald 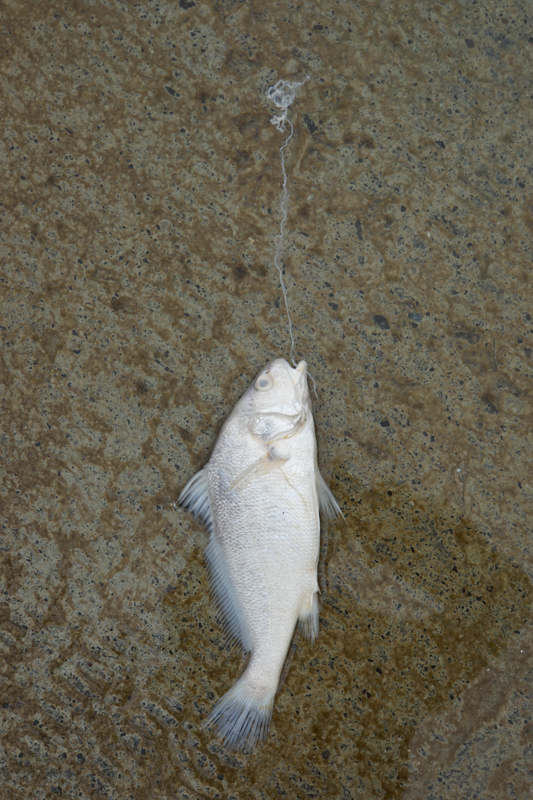