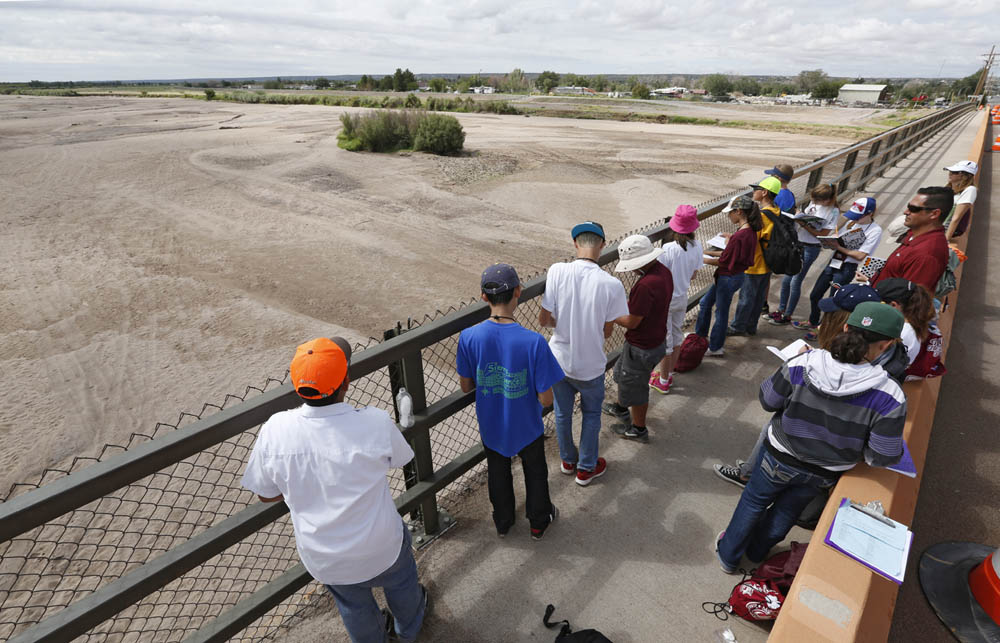 Water supply is tight along the Rio Grande in southern New Mexico.

It’s so tight, it required 10 years of planning, federal approval and a policy change by the board of the Elephant Butte Irrigation District for the International Boundary Water Commission to plant some trees along the river.

We spent Friday talking to the Irrigation District and the IBWC, looking at newly planted cottonwoods and willows and asking what the big deal is.

The basic problem is that trees use water, and in the Elephant Butte Irrigation District, which runs from Elephant Butte Dam to the Texas state line, all the water in the Rio Grande is spoken for. This means that there is no water available for new trees or anything else.

To ensure there was as much available water as possible for farms, and to increase the capacity of the river channel to move floodwaters, most of the trees along the Rio Grande were removed as the IBWC worked to straighten the river and channelize it to increase its efficiency for delivering water.

The agency mowed most of the land it has along the river to ensure saplings don’t grow up between the levees and the river and become trees that use more water and slow down floods.

This is a water policy ideal circa 1900. The result was an engineered ditch about 100 miles long. Most of the 22 species of fish once found in the river are gone. The water completely disappears almost every winter after the irrigation season ends and the gates to the dams are closed.

Then, along came the Endangered Species Act and pressure from environmental groups to put some of the trees back and let the grass grow.

There is also a basic value in having something that looks like a natural river, said IBWC spokeswoman Sally Spener.

“I think the people of the region have a connection to the river,” she said. “People want to sit under a tree by the river.”

Put another way: “We are just trying to offset the long term ecological impacts of our operation,” said Elizabeth Verdecchia, a natural resources specialist with the IBWC.

In 2009, the IBWC committed to restoring 550 acres of habitat and turning 2,000 acres into managed grasslands, instead of mowed and grazed fields.

But without a high water table and regular floods – which cottonwoods and willows depend on and are now very rare events thanks to the water diversions of groundwater pumping and dams – getting them to grow is very difficult.

In the past, the IBWC tried to give trees a jumpstart in their search for the groundwater by drilling holes and planting poles in the ground that would then sprout roots. Sometimes it worked, but a 70 percent failure rate was not uncommon.

The solution was to approach the irrigation district and ask it to view cottonwoods and willows not as environmental restoration projects, but as crops. Then, all the IBWC had to do was go out and buy the water and use the existing network of irrigation ditches to have it delivered.

“The plan says we are going to offset all the water we will use,” Verdecchia said. “We are considered farmers.”

The trees we saw with Verdecchia and Spener along the river were within a four-acre parcel that was surrounded by a berm of dirt so it could be flood irrigated with water from a drainage ditch.

The computer models run by IBWC estimated that the trees would increase water use from nine acre-feet a year to 20 acre-feet.

As for the river itself, there is still a lot to be done.

As we left the restoration site, we ran into the 90 students of Melly Locke’s three science classes at Sierra Middle School in Las Cruces.

“Life happens outside the classroom,” she said as her students chased butterflies in a non-mowed grassland. “We can teach the principles in the classroom, but a computer can do that. We have to get outside.”

They asked me why there was no water in the river and I tried to explain the drought and water policy. But as soon as 1900 came out of my mouth, they went back to staring up at the sky and the branches of the cottonwood they were sitting under.

They laughed when I asked them what they thought about the Rio Grande.

For most of their lives it has not flowed.

They corrected me and said, “You mean the Rio Sand?” 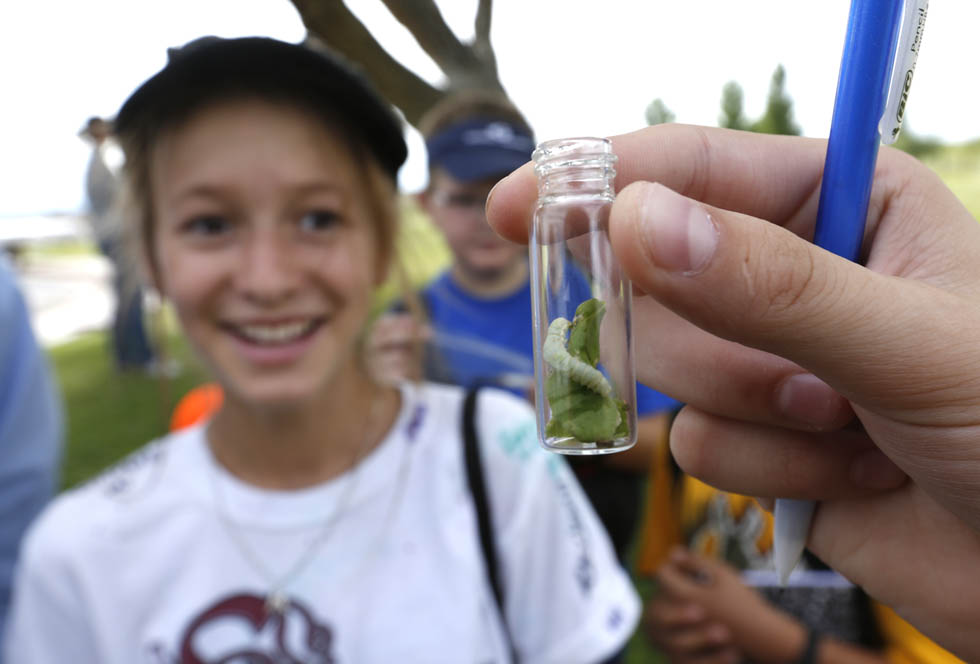 Students from Melly Locke’s 7th grade science class at Sierra Middle School in Las Cruces look at a caterpillar captured in a grassland next to the Rio Grande. Photo by: Erich Schlegel 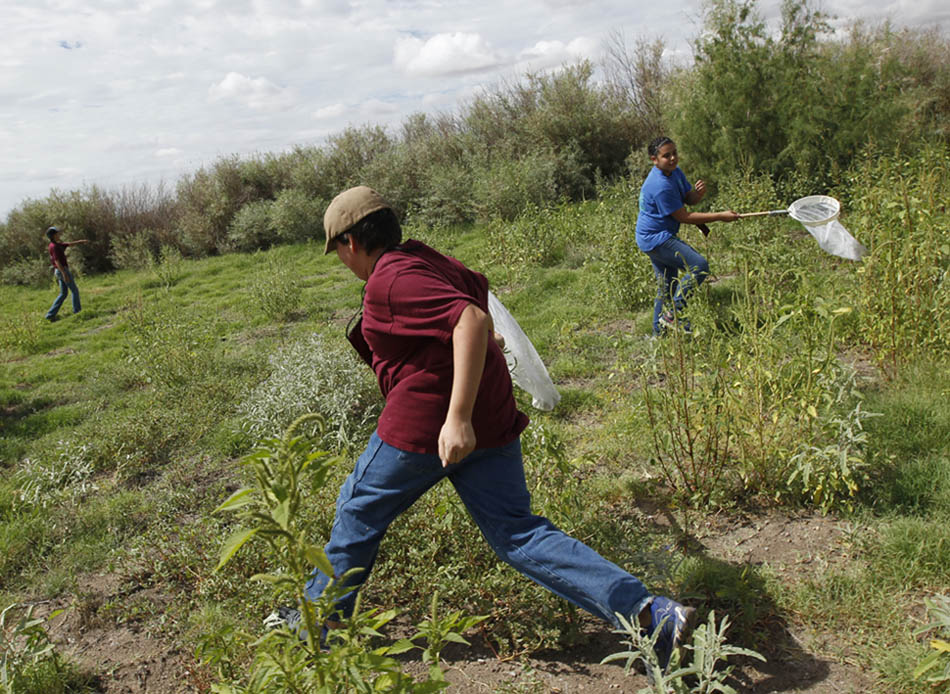 Students from Melly Locke’s 7th grade science class at Sierra Middle School in Las Cruces chase insects in a grassland next to the Rio Grande. Photo by: Erich Schlegel 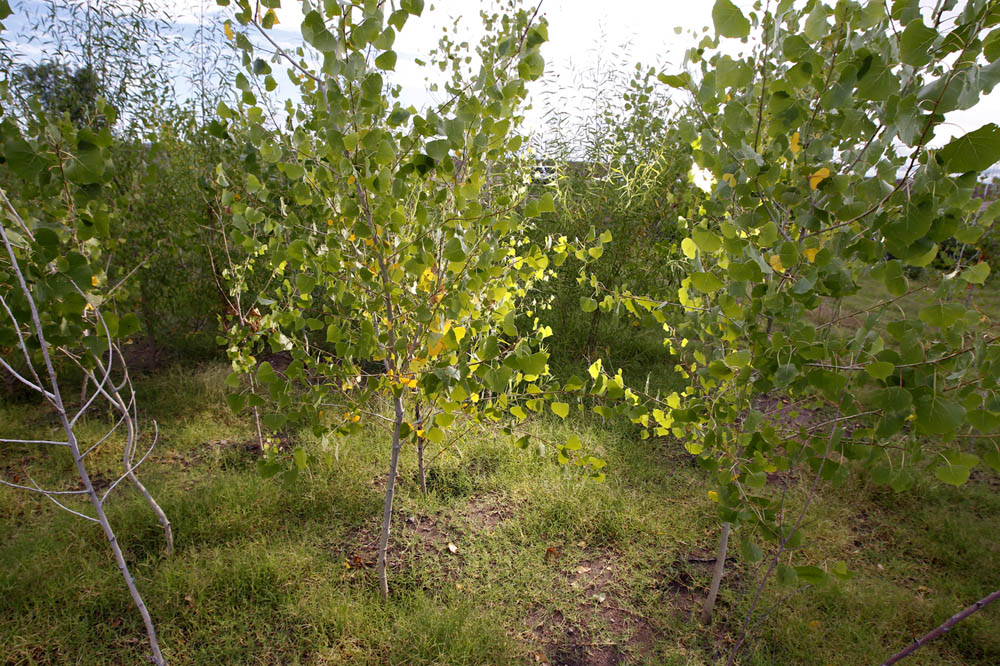 Newly planted cottonwoods glow in the morning sunlight at a restoration site the IBWC is working on along the banks of the Rio Grande. Photo by: Erich Schlegel 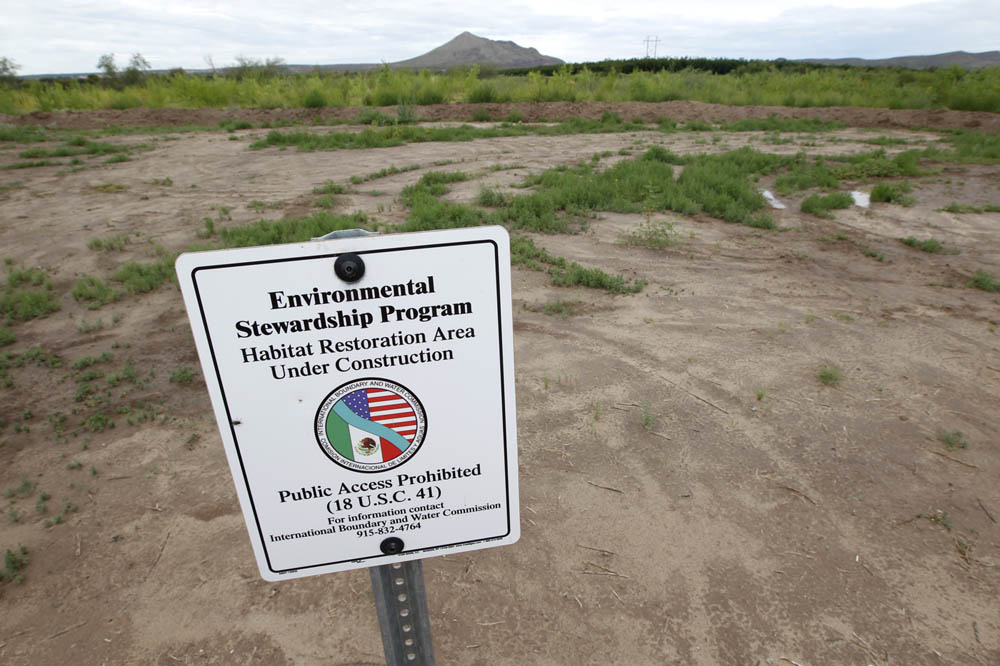 One of the 30 restoration sites the IBWC is establishing along the Rio Grande. Photo by: Erich Schlegel 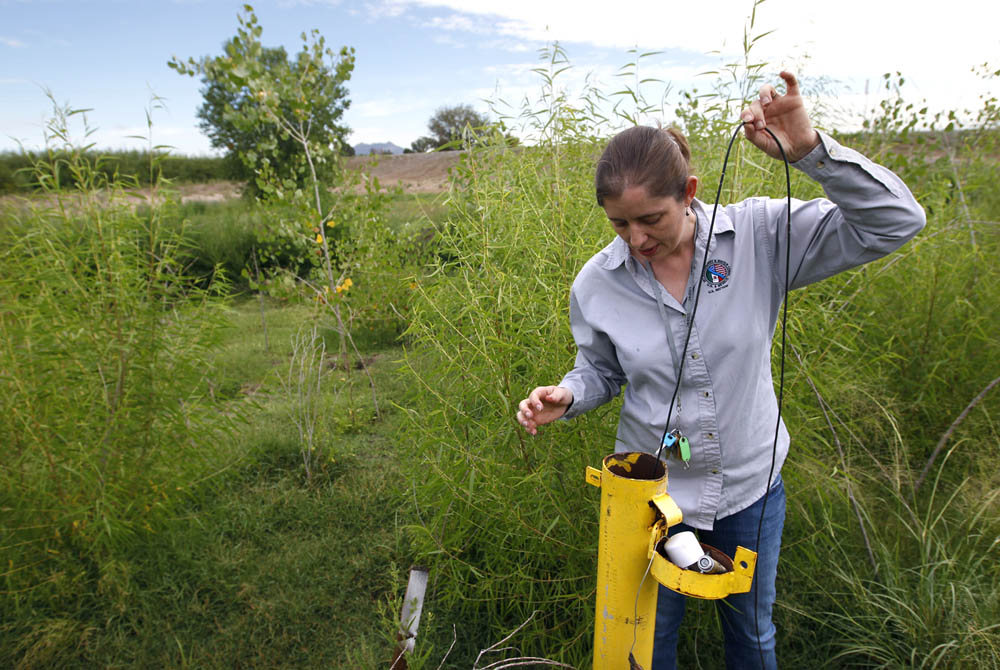 Elizabeth Verdecchia, a natural resources specialist with the IBWC, checks the water level in a monitoring well at a habitat restoration site along the Rio Grande. Photo by: Erich Schlegel