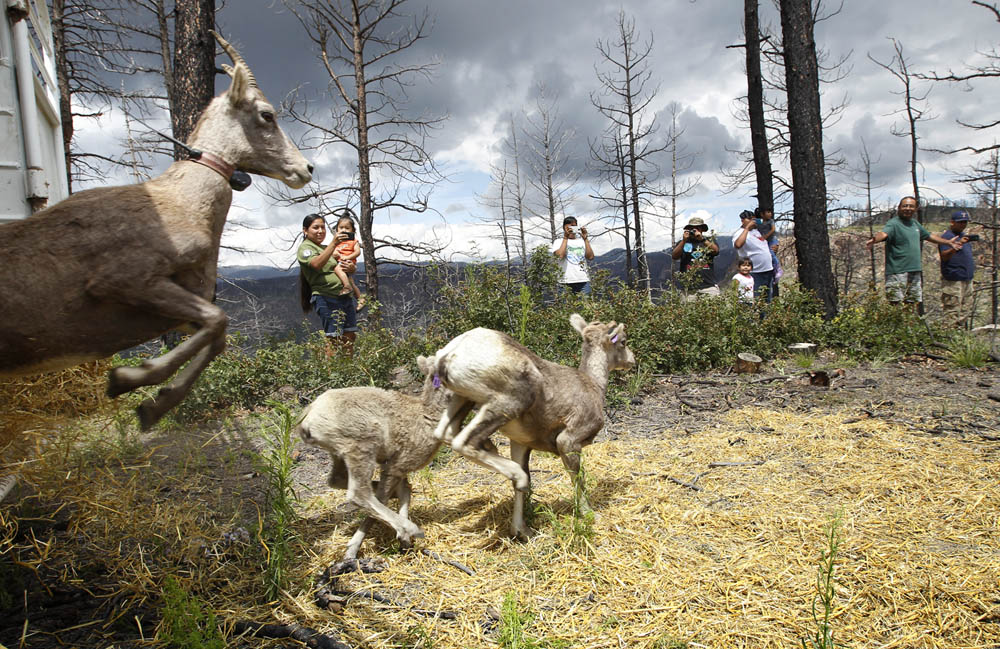 Ewes and lambs bolt out of a trailer into the Jemez Mountains. They are part of the first group of bighorn sheep in more than a century to be on these cliffs. Photo by: Erich Schlegel
Email
Twitter
Facebook

For the first time in more than a century, big horn sheep are wandering the ridges above the Cochiti Pueblo.  The sheep were once a key food source for the pueblo and their return marks a homecoming as leaders of the pueblo work to reconnect with their past.

“This is not just big horn sheep,” said Kai-T Blue-Sky, a biologist and member of the Cochiti Pueblo who worked for a year and a half to make the release happen.

The New Mexico Department of Game and Fish delivered 45 sheep by trailer after they were caught with nets dropped from helicopters at Wheeler Peak. The population there had grown too large to be sustainable.

Members of the Cochiti and surrounding pueblos greeted the sheep like celebrities. They lined up to shoot photos as the bighorn rams, ewes and lambs burst from the trailer and bounded away for the cliffs.

Afterward, Blue-Sky walked around shaking hands and being congratulated. He had found a positive outcome from the fires that had ripped through the dense stands of pines that once covered these steep slopes.

Before the fire, federal and state biologists dismissed the cliffs as unacceptable habitat for the reintroduction of sheep because the trees prevented them from having the clear views they need to spot predators.

Now the trees are pillars of charcoal and the views go on for miles. With the timely monsoon rains this summer, the hills are a vibrant green.

“The sheep should be real happy here,” said Bill Taylor, the wildlife biologist for Northwest New Mexico, who drove the truck hauling the sheep.

The reintroduction of the sheep is part of a much larger plan that Blue-Sky has to recover the species his pueblo depended on and reassert its role as a steward of the land.

He is working on getting turkeys reintroduced this winter and next year will work on pronghorn antelope.  The remains of the animals were found by archeologists and can be seen in the rock art that scattered across the mountains.  But they have not been seen in person for generations.

Blue-Sky said bringing the animals back is “a no brainer,” if the pueblo wants to rebuild its connection to the past. And there are some huge side benefits.

The releases, which have been happening all week in small batches, have gotten people from all Cochiti and neighboring pueblos to drive an hour over rough and washed-out roads to scramble around on cliffs so they can get a view of the sheep. There is pride in seeing them in the mountains again.

Now, work is being done to build a shared conservation ethic among the pueblos to take care of the sheep so that they are treated as more than trophy animals.

It’s also a success that Blue-Sky can point to as he works on more ambitious projects to reintroduce rainbow trout to Cochiti Lake and Rio Grande cutthroat to the water below it.

More than just a way to attract high paying anglers and create jobs, the fish will act as constant water-quality monitors.  The fish are very sensitive to changes in temperature and any source of pollution.  If something goes wrong, the fish will go belly up and everyone will know there’s a problem.

For Blue-Sky, who can rattle off 500 years of crimes committed against his pueblo, that kind of monitoring is much more reliable than anything the state or federal agencies will do.

It is the reason he became a biologist.  He wants to know exactly what, how and why management decisions are being made about the land his ancestors called home.

He wants the days of dams being built on sacred sites to end. So he is learning how those decisions are made.

“We can never be lied to in a language we don’t understand again,” he said.

More than preventing lies, he can find truths that will get people lined up on the edge of a cliff just to catch a glimpse of a big horn sheep. 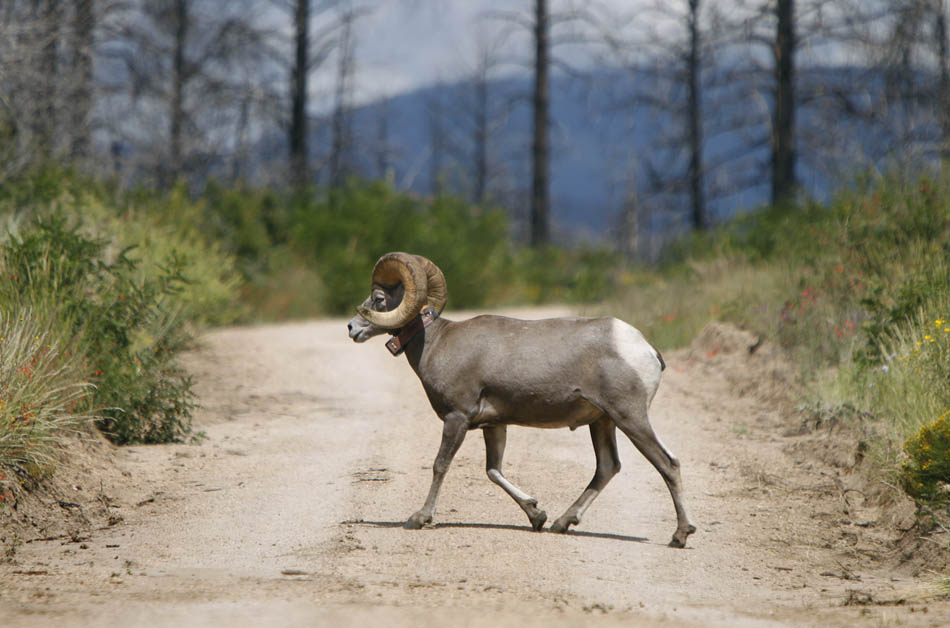 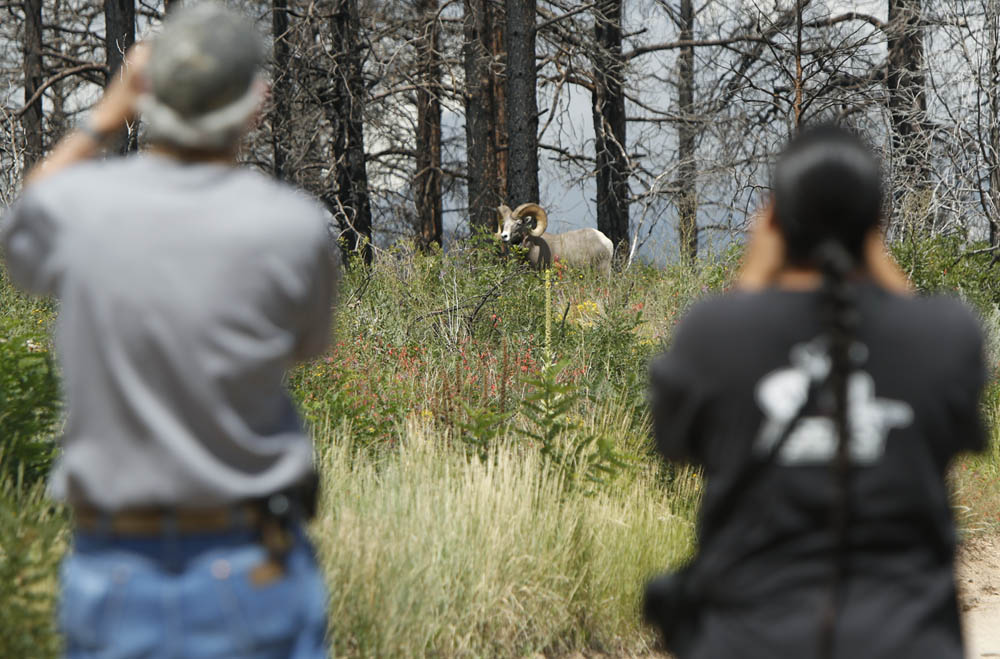 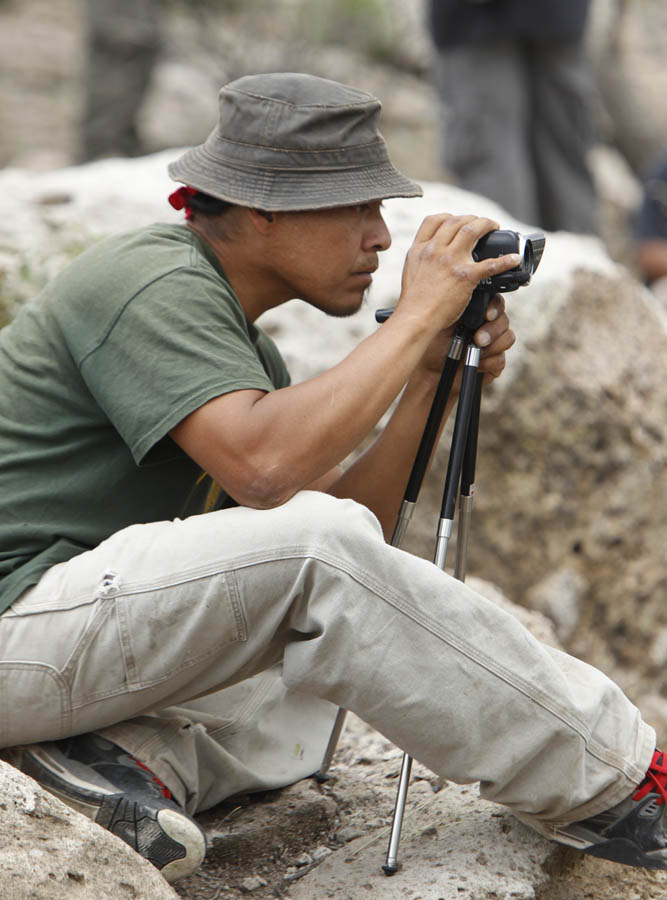 Aaron Melchor, a member of the Cochiti Pueblo, watches bighorn sheep explore their new home in the Jemez Mountains. Photo by: Erich Schlegel 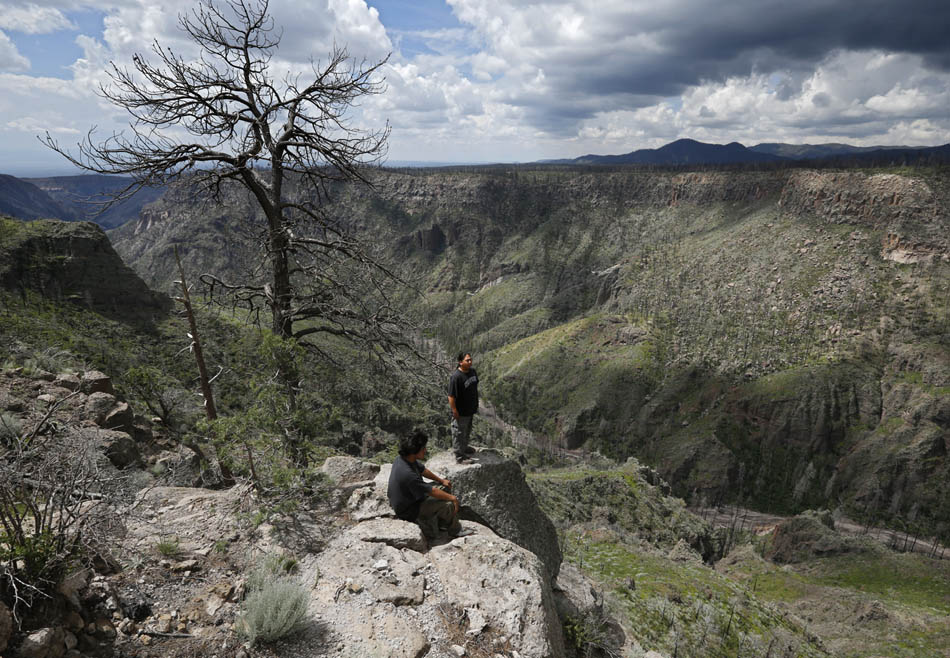 Kai-T Blue-Sky looks over land controlled by the National Forest Service that his ancestors called home and that he wants to help manage. Photo by: Erich Schlegel 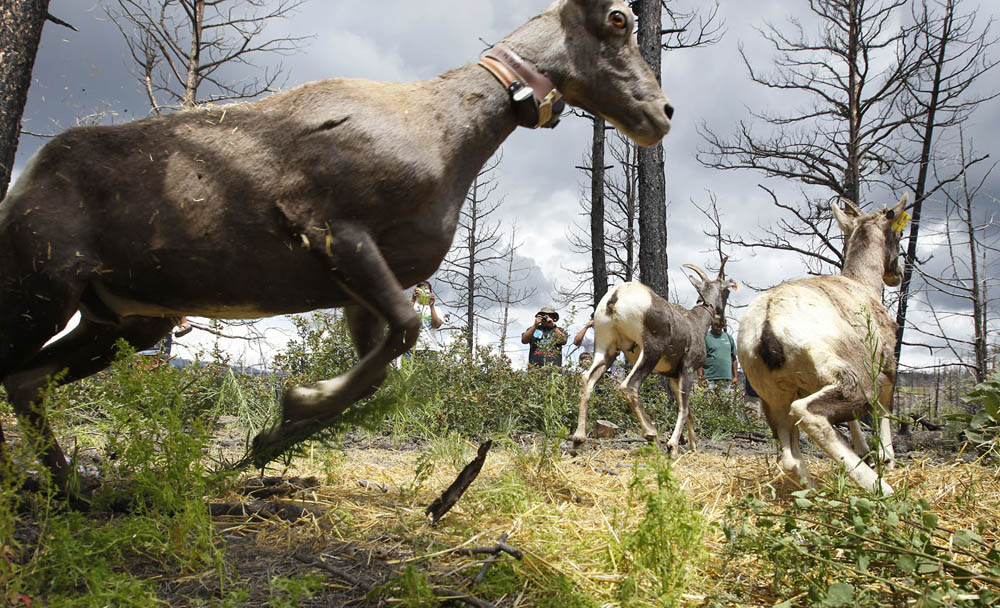 Bighorn sheep run after being released from a trailer. Photo by: Erich Schlegel 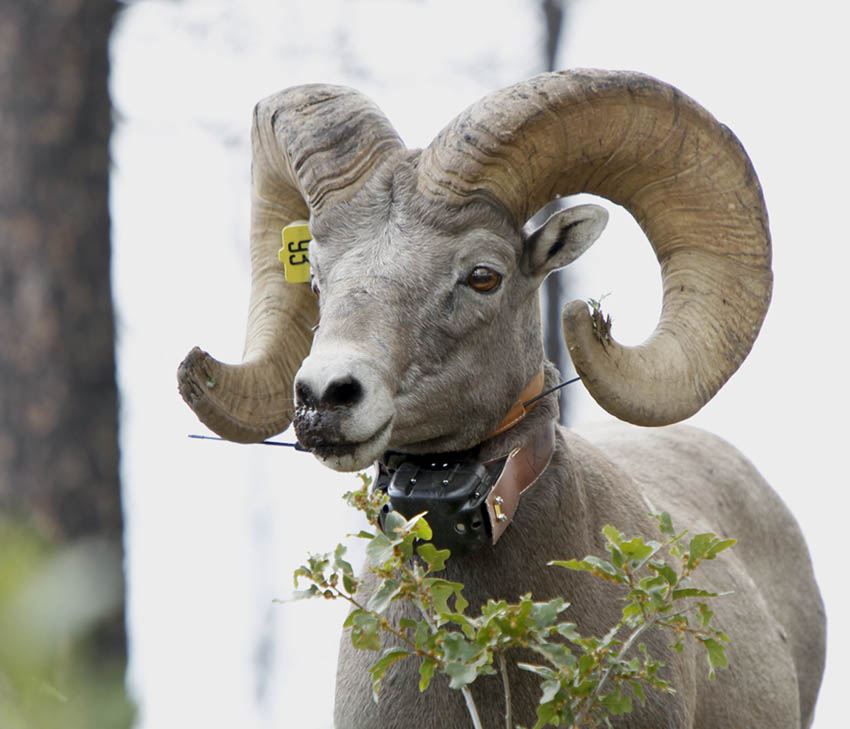 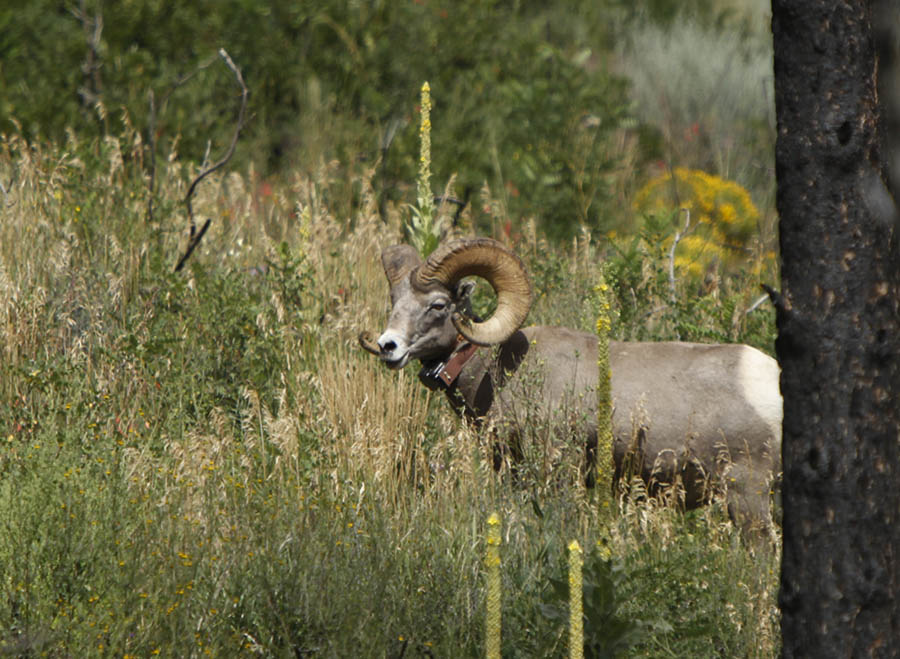